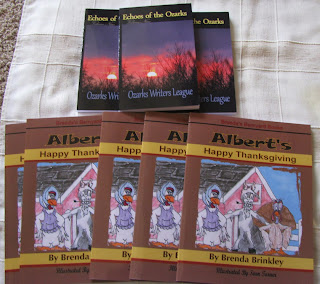 "Albert's Happy Thanksgiving" has been re-released in larger format. Albert is happy and so am I.

"Echoes of the Ozarks" Volume IX just came out. My short story, "Big Ears and Bandaids" is in this book. I also took the cover photo.

Albert is Happy, and so is Brenda. 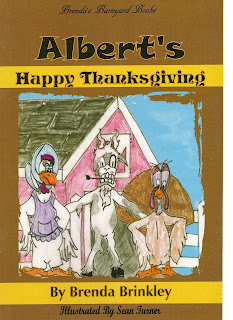 This little book has had big success. So big, in fact, that the publisher has decided to re-print it in larger format.
Albert and all his barnyard friends are available at High Hill Press. The book is available on Amazon. You can also get a copy from me if you happen to see me at a conference.
Cleveland the Green Camel is also available and I am working on the third book. It is almost ready to send to the publisher. I'm just hoping it is accepted.

Posted by Brenda's Barnyard Creations at 8:04 AM 2 comments: 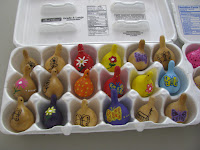 Yes, these are tiny gourds in an egg carton. I have painted them and I put a string through the top to make a little girl's necklace. They are a lot of fun. No, I didn't pick them early. They are full-grown.
Posted by Brenda's Barnyard Creations at 10:03 AM 1 comment: 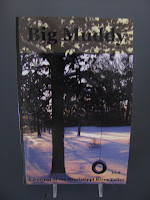 In May 2011, this photo won the Cliff Edom Photography Award at the Ozarks Writers League. There is a story behind 'Abandoned.'
I told hubby in the summer of 2010 that I wanted him to hang a tire swing in the yard. I explained that I wanted it to be there for the first snowfall. I thought I gave him plenty of notice, but when the first snow came there was no swing. I can only imagine what the neighbors thought when they saw hubby with a ladder hanging a tire swing in the snow. Of course I had to wait till the next dusting before I could get a picture. I took many, but this one was taken very early and captured the sun painting a variety of colors on the snow. 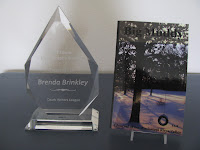 In October 2011, I had the picture and trophy on display at the Ozark Creative Conference in Eureka Springs. Susan Swartwout, Editor of Big Muddy, asked if she could use the photo for the next cover. I was delighted.       I got my copies in the mail today and am thrilled.   For more information about Big Muddy check http://www6.semo.edu/universitypress/bigmuddy
Posted by Brenda's Barnyard Creations at 10:20 AM 3 comments:

Fodder for thought and stories

Last Friday evening I helped judge a beauty contest for little girls. A totally new experience gave me lots of ideas. The mind is running amok.
I also decided to plant some bulbs last week and unfortunately dug into some poison ivy. I know what the stuff looks like when it has leaves, but all I dug into was roots. Now I have a serious rash and more fodder for a story. If only I could stop scratching long enough to write.
Write what you know. Well, I know I don't enjoy poison ivy. The next short story may be a doozy.
Keeping it short today. But look for another blog very soon. I am expecting a wonderful surprise and can't wait to blog about it.
Posted by Brenda's Barnyard Creations at 8:51 AM 5 comments:

The radio interview is over and I'm on to other projects. Publisher knows which one. (wink, wink) Now let's hope I can be successful.
But first I want to talk about change.

When I wrote Cleveland the Green Camel, it was written in rhyme. It took a while, but I finally made a great discovery: I AIN'T SEUSS. Once I took the story out of rhyme form, it worked much better. Sometimes a writer has to know 'when to say when.' It is difficult to make changes, especially drastic ones. But to improve the writing, it has to be done.

I was asked, during the radio interview, if the house were on fire which of my printed works I would save. That was a tough one.  I have written hundreds of articles and each is special in its own way. I have written about such a variety of things, I never get bored.
I also don't want to bore the reader with bad writing. That is why changes are necessary. Cleveland is a better book because I let go of the idea I could write like the famous Dr.
I am just me, and that's all I can be.
But I'll be the best me I can,
Just watch and you'll see.
Posted by Brenda's Barnyard Creations at 8:06 AM 4 comments:

Nervous in the Barnyard

Well, Albert and Cleveland will be making their debut on the radio Monday, March 12 at 11 a.m. on channel 1510 a.m.
Okay, I will be doing a radio interview about my children's books. Let's just hope I can find the right words and not sound like my usual self.
This is a radio program that interviews local artists and authors. I have never done anything like this before. I'm always asking the questions for an interview. It should be very interesting to be on the other side of the table.
I hope to get a word in about my short stories and the Ozarks Writers League.
OWL has been a tremendous help and inspiration.
Hope some of you have the time to listen.

Posted by Brenda's Barnyard Creations at 8:41 AM 4 comments:

Brenda's Barnyard Creations
I have been a published writer since 1983. After taking sporadic breaks to raise a family, I now write passionately. I have had over 500 articles published, and my short stories have won awards and been published in a number of anthologies. My photography has graced magazine and anthology covers.